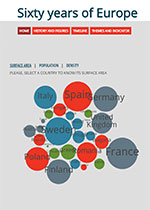 Now, 60 years after the historical signing, Istat provides an original account of the evolution of Europe: it starts from the numbers to look beyond the differences between individual countries and focuses on overall changes, economic and social convergence, the effects of policies.

Divided in four different themes – population, society, labour, economy – one for each phenomenon investigated, Italy’s data are compared with the E6 (the six founding countries) and the Eu28 aggregates (today’s European Union) . The picture that emerges, in part unexpectedly, illustrates the long path followed, denies some rooted commonplace, and shows other perspectives of the current complex situation in Europe.