88 thousand civil ceremonies took place in 2015 and they accounted for 45.3% of all marriages in the same year. Civil weddings registered an increase of 8% compared to 2014 while religious ceremonies continued to decline. This increase was mainly due to second or subsequent marriages.

2015 data about marital disruption reflected the impact of recent changes in the regulations. In particular, the introduction of the so called “fast divorce Law” caused a considerable increase in the number of divorces (82,469 compared to 52,355 of the previous year with an increase of 57%). The growth in the number of legal separations was less relevant (91,706 with an increase equal to 2.7% compared to 2014).

The average length of marriages ending in legal separation was approximately 17 years. The proportion of long-term marriages ended in separation had almost doubled in the last two decades (from 11.3% of 1995 to 23.5% of 2015).

In 2015, 89% of separations with children in custody was with joint custody; only 8.9% was with custody exclusively to the mother. This was the only relevant result of the application of the Law 54/2006 that introduced the joint custody as the preferred model.

As regards economical provisions, the proportion of maintenance for children paid by father was stable over time (94% of separations with maintenance for children). There were therefore no clear signals of a real application of the provisions that give the possibility to implement a direct support for expense items of children to the detriment of the traditional periodical support.

INFOGRAPHIC. Marriages in Italy by age of spouses(clic to visualize the interactive infographic) 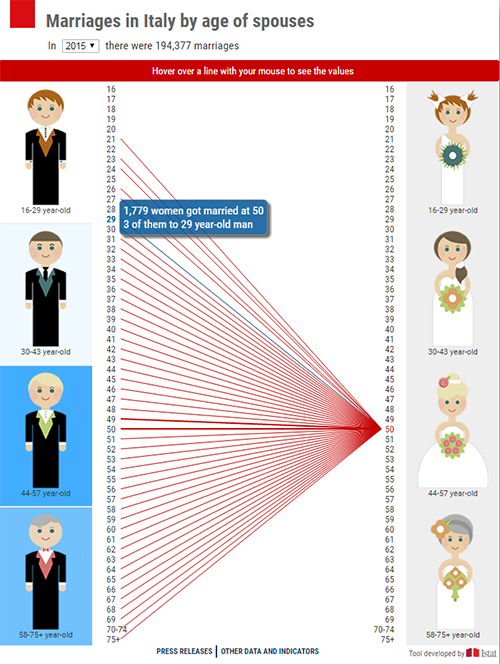