For the first time since 2001 a growing number of victims is reported compared with previous years (+1.4%).

A growth of persons killed in road accidents was registered in Eu28, too (1.6% more than in 2014): in total, there were 26,311 killed persons against 25,896 in 2014. In the comparison between 2015 and 2010 (year of the benchmark for European road safety strategy), mortality decreased by 16.7% in Europe and in Italy. Every million inhabitants, in 2015 there were 52 deaths in road accidents in Eu28 and 56 in our country, which ranked 14th in the European classifications, behind the United Kingdom, Spain, Germany and France.

The most frequent driving misbehaviours are linked to the distraction, failure to comply with road safety and precedence rules and high speed (in total 38.9% of cases). The main violations to the Road Code sanctioned by Police, in fact, are: speeding, failure to use safety devices and the use of mobile phones while driving.

2015 has been a year signed by a recovery of mobility: the new registrations of passenger cars increased by 15.0% over the previous year; the motorway journeys also grew by 3.6% compared to 2014, with over 79 billion kilometres travelled. 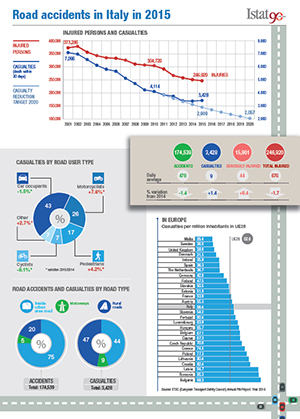 Infografhic: Road accidents in Italy in 2015