The drop in marriages is partially due to the decline in the absolute number of young adults. The latter is in turn attributable to the sharp reduction in fertility occurred after the 1970s. Young Italians aged 16-34 accounted for less than 11 million in 2014 (-1.3 million compared to 2008).

Men and women are getting married increasingly later in life. In 2014, the mean age at first marriage was 34 for men and 31 for women (that is one year older compared to 2008).

Civil ceremonies accounted for 43% of all marriages in 2014. Both in the North and in the Centre areas of Italy, civil marriages exceeded those with religious ceremonies, respectively 55% and 51%. Civil ceremonies are becoming increasingly popular for marriages with both Italian partners marrying for the first time (28.1%).

Marriages with at least one foreign spouse are about 24 thousand (12.8% of all weddings). Their decline is due to the decrease of marriages involving foreign partners.

The average length of marriage ending in legal separation is 16 years and the trend towards marital disruption intensifies with more recent marriages. Marriages ended in separation within 10 years have almost doubled. They were 4.5% of all marriages celebrated in 1985, compared to 11% of those celebrated in 2005.

The dynamics of nuptiality and marital disruption varies greatly from region to region. Their analysis strongly suggests the presence of a geographical gradient, with first marriages with civil ceremony among Italian couples, legal separations and divorces more common in the more secularised regions in the North area than in the South and Islands areas.

DATA VISUALIZATION. The process of family secularisation in Italy 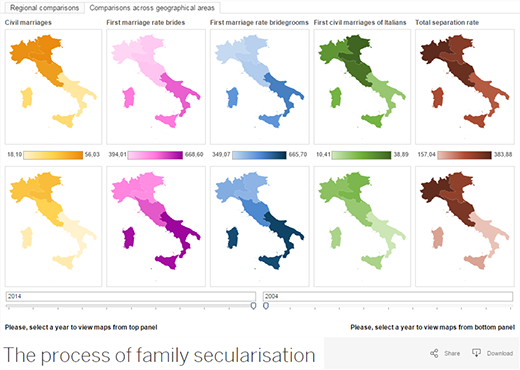